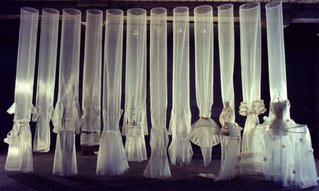 December 2nd is the opening
Exhibiton runs from December 2 to December 23, 2006

Track 16 Gallery is pleased to present the exhibition, Lun*na Menoh:
1986-2006. The exhibition will run from December 2 through December
23, 2006, with opening reception for Lun*na Menoh from 6 to 8 P.M.,
with a fashion show featuring the work of Lun*na Menoh to follow, as
well as a performance by her band, “Jean Paul Yamamoto”. 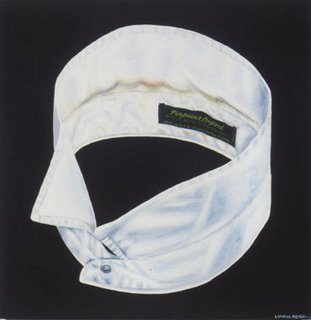 This first full career survey of Los Angeles artist Lun*na Menoh will
feature multiple works from all her art-making practicesâ€“â€“painting,
sculpture, performance art, and video. Anchoring the exhibition are a
dozen of Menoh’s subversive one-of-a-kind sculptural garments. In the
Surrealist tradition, these wearable artworks are at turns witty,
diabolical, and unabashedly beautiful. “The Magical Story Teller
Dress,” for instance, is a mechanized gown with a full skirt that
incorporates several picture frames; as the wearer weaves her tale,
paintings in the picture frames shift to illustrate the story. “Men’s
Wardrobe” is a clothing rack of men’s wear that’s been stripped down
to nothing but the seams, and “Which Room Do You Want to Get Into?” is
a bright yellow jumper inset with fantasy boxes evocative of work by
Joseph Cornell. The show will also include several pieces from Menoh’s
“Dirty Shirt Collar,” project, which includes a line of clothing
fashioned entirely from dirty shirt collars, and a series of painted
portraits of her favorite dirty collars. The founder and sole member
of the band Jean Paul Yamamoto, Menoh recently premiered her work of
musical theater, “A Tribute to Yoko Ono,” at LACE. 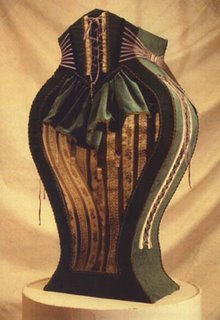 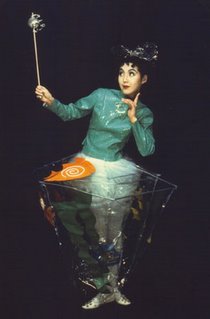