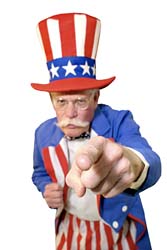 Sure, everyone’s got a wiseacre opinion on politics & is probably willing to tell you all about it. Me included. Instead of hectoring my wife with how-you-should-vote-this-year lectures, which she loves and follows to a T every chance she gets, I figured I’d thrown down my 8 simple rules for you to take to the polling place next week – that is, if you’re an American and if you plan to vote. I’ve only missed one election in the 21 years I’ve been allowed to cast a ballot – for Goleta Water Board in 1987 – and I’m still pretty pissed at myself for skipping that one.

These are the standards I use to manage & guide my epic decisions every year, and if I had my way, you would too. Take a look and let me know if I missed any!

1. WHEN IN DOUBT, VOTE NO. – This is perhaps my most fundamental rule. If I can’t be convinced in fairly short order that an initiative is worth supporting, it probably has been obfuscated to death, and I know I’ll ultimately regret the eventual price tag or societal costs. Better the status quo in most cases, and maybe next time the man will think a little harder about what he needs to win you & me over.

2. IF IT SOUNDS TOO EXPENSIVE, IT PROBABLY IS. – Particularly with bond measures, and anything that purports to be “for the children”. Almost always a “no” – which is not to say all bond measures, just the ones that get really fuzzy on true costs and benefits, which is pretty much all of them.

3. SPEND A HALF-HOUR WITH THAT BOOK THEY SEND YOU. – And not in the parking lot next to the polling place on the day-of. It’s not fun nor pretty, but if you know where you stand on most core principles, you’re probably already able to make these yes/no decisions pretty quickly, right?

4. LOOK AT WHO’S ENDORSING IF YOU’RE ON THE FENCE. – I don’t know, that’s sort of the final tie-breaker for me. Try not to get fooled by bogus “taxpayer” groups, because they’re often neither your protector nor your friend. And if a giant union is behind it, watch your wallet (nothing against big unions, of course – if we were in 1935).

5. DON’T BE AFRAID OF A THIRD-PARTY CANDIDATE – BUT DON’T BE FOOLISH, EITHER. – I tend to vote Libertarian a lot of the time, knowing full well they’ll never come close and would probably be total moonbats if they ever actually made it into office, but as many of Ralph Nader’s 2000 election voters will tell you, there’s a time and a place for the protest vote, and a time to take your lumps & go lesser-of-two-evils.

6. ALWAYS VOTE NO ON SYMBOLIC MEASURES. – Like “it is the resolution of the people of San Francisco that the city stands opposed to global warming”. The amount of money and effort spent to get meaningless feel-good crap on the ballot is preposterous, and I always vote no on these even if I’m behind the sentiment. Apparently next week the people of San Francisco are planning on impeaching Bush and Cheney – how about that?

7. THROW AWAY ALL MAILINGS, AND TUNE OUT THE TV. – Because their commercials lie and distort. The aforementioned book will tell you all you truly need to know, and when it doesn’t, vote “no”.

8. DON’T OVERREACT TO CLAIMS AGAINST YOUR PRIVACY – NO ONE REALLY CARES. – The fetish over privacy in a lot of ballot initiatives is staggering to me, in an age where the generation behind me puts their entire lives & interests online. I think increasingly, the amount of people that truly have a legitimate claim on their privacy are a mile wide and an inch deep. I joined the ACLU at one point in my life and left soon thereafter, because the paranoia of the people in the meetings bordered on the absurd. Twenty years from now these debates about privacy rights will look archaic, because increasingly – we don’t have any, and people without something to hide honestly don’t care all that much.

Hopefully I’ve given you something to make your blood boil, or better yet, a list of maxims to cut out and put on the fridge! Thanks for reading!