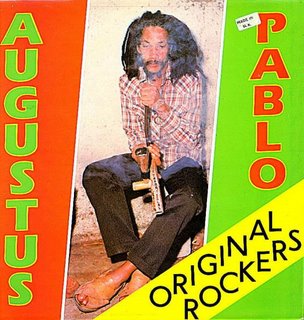 This release originally came out in 1979 as a compilation of 45s that AUGUSTUS PABLO had recorded with Clive Chin and with his holiness KING TUBBY from 1972-75, and it has seen its way to a couple of different LP & CD “versions” since that time. “Original Rockers” features a handful of dubs and some relaxed & spaced-out instrumentals, and some stuff in a netherworld between the two. Pablo’s melodica is not as omnipresent as it is on the ruling “King Tubbys Meets Rockers Uptown” (simply put, one of the Top 5 dub records of all time & for many folks it’s the hands-down #1), but he’s definitely around on certain cuts, snaking his way through all sorts of drop-outs & whipcrack effects. In fact many of these backing tracks are heard on that record, as well as the two other Augustus Pablo discs I have, “El Rocker’s” and “In Fine Style”. Would it be too controversial to suggest that the way of the 1970s dubmaster was to source a couple of dozen great songs, and then mix, mix, mix the hell out of them into bold new forms? Either that or it’s just coincidence that I feel like I’ve heard every backing track on here before – which is not at all to say this one isn’t fantastic nonetheless. Anything by Augustus Pablo from this era is creepy, disjointed, sparse and yet totally beautiful, especially when he fires up the melodica and lets it slither around. This is just a great set of dub and near-dub, & I know there’s lots more of his back catalog I still gotta get acquainted with.