SCAFFOLD “Live at the Queen Elizabeth Hall 1968” CD (el/ Cherry Red)… It was a swinging time for music in England in the ’60s. It was also a pretty cool era for comedy. Scaffold was a comedy trio that mixed a smattering of music with a whole bunch of funny bits. Paul McCartney’s brother Mike was in the group and that’s probably why Scaffold received a bit more notice than a lot of other comedy acts of their day. The liner notes mention the group being forever remembered for a novelty singalong called “Lily the Pink.” Unfortunately, that piece wasn’t part of the set they performed here. There is a jolly touch of whimsy in one of the rare musical accompaniment numbers, “Ten Whiskey Bottles,” in which the singer gets progressively smashed while guzzling hootch and progressively screws up the lyrics. While some of this is very funny, it requires an awful lot of undivided attention to get through the heavily accented banter. Fans of Monty Python, with the requisite patience to sit still for an hour in an otherwise quiet room and just listen, will be rewarded with some classic irreverent British humor. 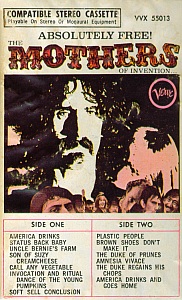 (Still whizzing and pasting – and pooting even — through my newly-acquired stack of vintage Zappa material, folks, only to discover…..)

Those sophomore 12-inches from Frank and his Mothers are, I’m afraid, just too easily overlooked and unheard, stretching as they do between the twin monumental peaks of Freak Out and We’re Only In It For The Money.  But in rear-view, I posit that spiffy little long-player known as Absolutely Free, recorded in a mere twenty-five hours circa 11/66, reveals itself to be, maybe, just maybe, the man’s true whacked masterpiece.

Two vinyl-side-long suites examining the festered underbelly of LBJ’s America, its ragged overall sheen of wise-ass vocals and hot-rawk jamming may indeed lure the listener in for Just Another Boogie From L.A., granted.  But as no less an expert on the subject as original Mother Don Preston has since revealed, much of Absolutely Free was in fact painstakingly rehearsed and recorded in intricate four-and-eight-bar sections requiring dozens of takes apiece, and the music itself was just as comfortable quoting Stravinsky as it was the Supremes, Kingsmen, and/or the band’s beloved vegetable-encrusted doo-wop.

Also, this record just happens to contain the legendary original appearance of “Brown Shoes Don’t Make It” which, if I may be so bold, absolutely eats Pete Townshend’s “A Quick One While He’s Away” in the mod mini-opera department.

But finally, take one quick listen to “Why Don’tcha Do Me Right,” the band’s 1967 non-hit single included as an Absolutely Free bonus track, and find yourself agreeing with Negative Dialectics of Poodle Play Zappauthor Ben Watson when he claims that had The Mothers released only a rare seven-inches or two or three like this back in the daze, then duly disappeared, they’d be widely hailed today as one of the world’s most wholly Nugget-worthy Garage Rock Wonders.  Excuse me while I call Little Steven’s radio show with a request…..

Which future member of none other than Monty Python made his audio debut on Side Two of Absolutely Free ??

First correct response wins an all-expense-paid trip as the first member of the Peace Corps to be sent to Alabama, as The Big Surfer would say…..