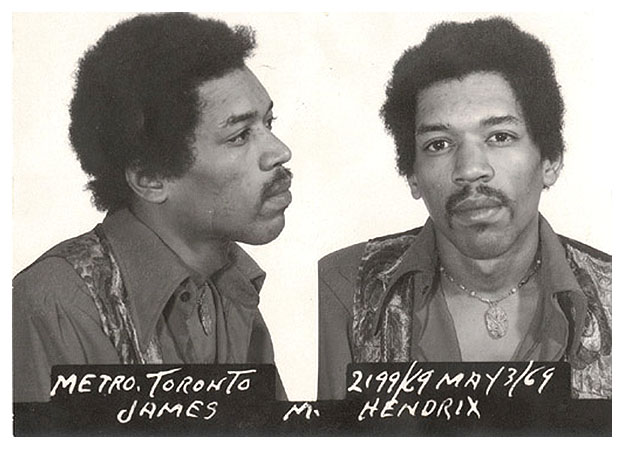 Believe it or not, the very first "real" concert I was ever allowed to attend as a wee Canadian tyke was The Jimi Hendrix Experience at Toronto's Maple Leaf Gardens, May 3, 1969. â€¨â€¨

I'd already been a fervent fan for a couple of years, having spent most of my Grade 8 art class making swirly sketches of Jimi in charcoal. Plus the Are You Experienced? album was right up there â€“ almost â€“ with Monkees Headquarters on my 1967 Most-Played List.â€¨

Fast-forwarding, Christmastime '68 was spent, between runs down the local tobogganing hill, digging all eight vinyl sides of The White Album AND Electric Ladyland and, most likely as a direct result, my gym-class rhythm section and I were just starting to assemble our very own semi-power trio when word filtered along the groupvine that the Experience were planning to stop by our very neighborhood in a few months as part of their possibly-Farewell World Tour.â€¨â€¨

My most-trusted pal Ric scored two tickets in the Gardens' nosebleed section and I fibbed to my parents that we were off to a hootenanny (!) for the evening. Yet no sooner had we approached the venue that word began a'buzzin' that our hero had just been busted for carrying a batch of non- pharmaceutical mood enhancers into Toronto Airport. Hmmmâ€¦

Undaunted, we climbed skyward to our seats, sat on sonic needles and pins-ah through both opening acts (the pretty cool Cat Mother & the All Night Newsboys, whose big hit "Good Old Rock n Roll" my little band was already struggling to learn, followed by none other than, uh, Fat Mattress) til the one and only Jimi Himself sauntered on stage, miraculously only a few minutes late.â€¨â€¨

Now considering all the man had already been through that day I guess it was no real surprise the evening's set consisted of mainly down-cast tunes a la "Red House," though Jimi did graciously treat the teenage throng with a quick encore full of that fabled, fiery Foxey Purpleness of yore.

And then, suddenly, he was gone. Experience and all.

James Marshall Hendrix returned to town briefly that December however, just long enough to be completely exonerated of all narco-charges ("Canada has just given me the greatest Christmas present ever!" he exclaimed to the Toronto Daily Star), but I suppose one could question if, or why, that life lesson ultimately went unheeded. And I suppose it does say something that out of all the delicately detailed minutiae forever etched upon my grey matter concerning that momentous concert forty long, long Toronto Mayâ€™s ago, I can still most vividly recall EXACTLY what Jimi was wearing (all Harlem-Asbury chic all the way!), what I was wearing even (don't ask), the appropriately brilliant weather, the commuter train Ric and I snuck on after we told our parental units we'd just be folking around …hell, I even remember the proto-Bowzer moves Cat Mother & Co. deployed whilst performing their one hit wonder!â€¨â€¨

But do I recall a single sliver of the sounds and/or stylings of the Noel Redding-fronted Fat Mattress performance of that same, utterly magical night? No sir, I do not. Which reminds me: Mr. Redding himself passed onward and upward to that great big Gardens in the sky six years ago May 11th.

And the moral, perhaps, to this all? Well, I still find myself revisiting Electric Ladyland on almost as regular a basis as I do the Monkeesâ€™ Headquarters. So you see some things, I guess, shall never change.