I sold out of my book, tuesday. And the new parody comic, Krayons Ego, was a huge hit and sold out as well.

Apparently there was some pact that the contributors to Krayons Ego wouldn’t reveal themselves… But I wasn’t in on that pact originally, and my ego makes me wanna tell everyone which pages I did. Here’s one of the best reviews I’ve ever received for comics:

The rest of the books is great. I finally got to read it at Comicon last week, and laughed out loud at several of the pieces. I particularly like “Project Inferior” and the Jefferey Brown parody and the stab at the reigning king of parody,

So, as I promised last week, here are the pages I did for the book. Those of you who aren’t familiar with the indie comics world, may not get these strips… they are ridiculous exagerations and inside jokes, but anyway here’s a little explanation: As I mentioned before, my pages were a parody of 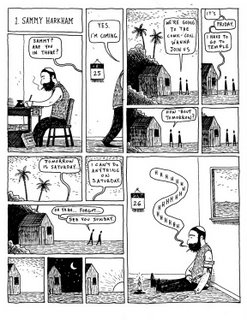 I got a lot of great books at the Con this year, including: