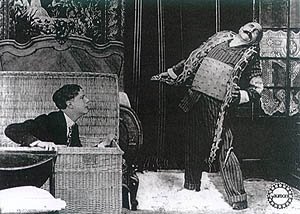 The Surrealist Spanish filmmaker Luis Bunuel had transmitted that he to a great extent, preferred Louis Feuillade’s Fantomas serial to any of the so-called avant-garde films made at the same interval during the early Twentieth Century. Bunuel perceived the serial as an art form without the useless baggage of art attached to it.

French filmmaker Alain Resnais was quoted as saying “Feuillade is my god. I had always been a fan of the Fantomas dime thriller novels, but when I finally saw the films at the Cinematheque in 1944, I learned from him how the fantastic could be more easily and effectively created in a natural exterior than in a studio. Feuillade’s cinema is very close to dreams and is therefore perhaps the most realistic kind of all, paradoxical as this may sound.”

This infatuation for the physical with an additional mixture of dreams illuminates the Surrealists love for Louis Feuillade and his cinematic version of Fantomas (1913-1914). Feuillade’s blend of natural exteriors and interiors with the dreamlike conspiracies comprise an inner–world, where anything can happen at any place. What seems to be the axiom is usually just an illusion. Images which seem so natural are truthfully revelations that are disturbing to the subconscious.

Ever since my father’s unexpected death in a car accident, non-reality and what I feel is fundamental has become an overheated tango dance. Persons who were close friends become strangers in a matter of hours. The world has changed positions by just one incident. When I saw one segment of the five-part serial, Juve Contre Fantomas, the film had expressed my horror and fascination with images and people, and how they can mutate mysteriously into another disguise. 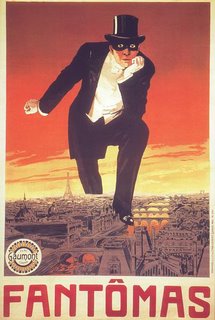 The fictional character of Fantomas represents the sleeping evil which rests in our subconscious, ready to strike at a moment’s notice. Obviously whenever there is a misdeed somewhere on this world, Fantomas is behind the hideous crime. A majority of the public is not aware of this fact, except for the brilliant detective from the Paris police, Juve. Only he alone can stop evil, better known in his human form as Fantomas! As a master detective, Juve recognizes that Fantomas attacks from within: meaning he detects that Fantomas exists inside the subconscious — particularly Juve’s.

Here we find the eternal theme of two brilliant (and in most cases, indifferent from the rest of society) individuals fighting for the control of…actually control itself. Good and Evil sleeping together in a bed made for sexual passion and when it manifests itself into politics – the World explodes!

In the film series and books by Marcel Allain and Pierre Souvestre, Fantomas’ victims are usually people in high society. There is an undercurrent cast of political terrorism in Fantomas’ methods – kidnapping, pillaging, and killing members of the upper-class. The subject of control is very strong in the series, and the question that repeatedly comes up is: who is in supremacy, Juve (good) or Fantomas (evil)?

One wonders if Feuillade’s version of Fantomas is not a politically motivated. One furthermore imagines why Fantomas and his gang only rob and murder victims placed in high society. Fantomas does not seem to be a man (spirit?) involved with politics of thought, but politics of consciousness. Fantomas steals and kills – therefore he exists!

For all we know his victims may be the living dead; perhaps only the brilliance of police inspector Juve and Fantomas can endure and the flesh (which Fantomas and Juve discard like old clothes, when in disguise) is an illusion when placed in a “real” ambiance. 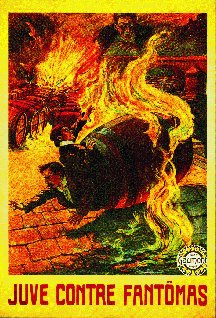 Feuillade played with the real and unreal in natural settings in all of his serials. The Surrealists were the first ones to notice this quality in his work, and afterward, an even stronger influence appeared in the French new-wave films by Godard, Franju, and Resnais. There is a joy of illogical happenings in his films, which only a handful of filmmakers play with. Bunuel and Godard also show us that logic becomes boring after a while.

In writing about the Fantomas texts, the magnificent poet and critic of the nineteen-teens, Guillaume Apollinaire has been quoted as saying “that extraordinary novel, full of life and imagination…from the imaginative standpoint, Fantomas is one of the richest works that exist.” The wild and characteristic vision of Surrealism which is in the novel and films were highly appreciated by the artists of that time. Besides Apollinaire, there were the poets Robert Desnos, Jean Cocteau, Max Jacob, and Blaise Cendrars; the painters Picasso, Juan Gris, and Magritte. All of them were fans who used the resource that is Fantomas, for their own work.

All of these artists realized the dreamlike, irrational qualities of the Fantomas (film and book) series. Not the paint-by-numbers school of art that is currently being produced in a laboratory known as a classroom, but in that mysterious interval when the conscious becomes the subconscious. As art works are being hatched in this phantom transition, so are in a sense – the crimes of Fantomas.

There is a dauntless wild abandon when entangled with crime and art. The mad impulse to move from the so-called norm into another realm – is of course, an intoxicating act of creation. In this atmosphere, Fantomas is just as creative and mad as Antonin Artaud and Marquis de Sade. Both of these artists investigated their imagination and sanity to compose a weapon with words so as to antagonize society. Fantomas is a liteary creation used for the same purpose. Intentionally, the Fantomas film and books were produced only for amusement sake, but there are unmistakably undercurrents of dread, fear, anxiety, and perverse sexuality.

In Juve Contre Fantomas there are scenes which allude to bondage and S&M. In one particular scene Juve establishes a trap for Fantomas in his apartment. To protect himself from the assassin, Juve wears a truly bizarre garment consisting of spikes around his waist and arms. He then lingers for him in his own bed.

Fantomas also has a Rasputin charm over women. In one scene he is entertaining a pair of women at a posh restaurant. He also “dominates” a young lady, who is totally devoted to him and his cause. Another female is a love slave, awaiting at a large house for her master (usually in disguise) to appear. On the other hand, Juve seems to have no time for pleasure. His only passion is to catch Fantomas…And as I mentioned earlier, perhaps Juve wants to restrain Fantomas in his own bed!

The nature or lack of character is interesting, in that the “sexual” quality of Fantomas becomes stronger owing to the scarcity of a concrete identity. He is a master of disguises because of his line of work, but one wonder if this is not tied to his sexual identity. Each character he portrays is draped in fetishism. Juve is also a master of disguises, and likewise savors the changes his body makes.

Watching the film one sees a duel to make and relinquish as many identities as possible. In the beginning montage of Juve Contre Fantomas, each character (Juve & Fantomas) displays all the disguises that they will wear in the film. By the end of the film one sees identity being adjusted as simply as changing a soiled shirt. In most modern works of art, the need of identity or conscience is a source for the “lost man or woman.” One thinks of Oscar Wilde’s “Portrait of Doran Gray” or Luigi Pirandello’s underrated novel, “The Late Mattia Pascal” which depicts the fall of one who is seduced into the conflict of good and evil. On the other hand, Feuillade/Fantomas relishes the chance to throw conscience out the window. The film is exhilarating in its love for anarchy, bondage, perverse sexuality, political consciousness and, more importantly, aesthetic revolution. Unintentionally, (which is the main ingredient for art-making) the film and novel are an inventive terrorist attack on the fear and mores of the bourgeoisie.

During the actual filming, Feuillade never used a shooting script. Andre Bazin – the film critic and theorist – wrote that “Feuillade had no idea what would happen next, and filmed step-by-step as the morning’s inspiration came.” The early pioneers of cinema all worked this way; it was not till the studios insisted on ideas put on paper for financial verification that things changed. Currently, Jean Luc-Godard is perhaps the only mainstream filmmaker who does not use a script, while shooting a film.

This also suggests that early cinema-making was a Surrealist technique in making art. Along with Feuillade, one thinks of the other “native” Surrealists such as Mack Sennett and Buster Keaton. Although their works were dissimilar, they contributed a suspicion on what is real and does it matter. It was not important to them to show “logic” moving from one scene to another. The early filmmakers shared a common dream occurrence where anything was allowed.

In the conclusion of “Juve Contre Fantomas” there is the magnificent image of Fantomas, dressed fully in black with a hood over his face, raising his arms in characteristic joy as he explodes the house with what he thinks is Juve still inside the structure. This is a spectacular moment and one wonders how many in the audience are thrilled with this commitment to artistic destruction? In certainty, since this was the end of the second segment out of five in the series, it ends with a large question mark (?) on the screen. This of course may center on what will happen in the ensuing segment…or is it a straightforward question to the conscientiousness of the public out there watching the film?