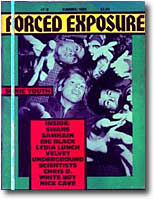 Continuing on with our waltz through the history of FORCED EXPOSURE magazine (see previous installments here and here), we come to a very important “double” issue from 1985, in which virtually all hardcore punk pretentions were shed, and the magazine dove in deep into the US noise underground. Byron Coley, before only a sometime contributor, was bumped up to “Jazz Editor”, and in effect became part of the 2-man team with Jimmy Johnson that made Forced Exposure the 1980s force it was. It starts with an abysmal Lydia Lunch rant on the title page, such an over-the-top Kill!/Maim!/Destroy! fake-o nihilistic treatise I wouldn’t have been surprised if she penned it in the margins of her Pee-Chee or Trapper Keeper. Unfortunately the FE guys fell for this woman hard – and I can kinda understand – but her non-physical talents were marginal at best, and she was treated like a deadly serious playwrite/author/spokesmodel for the sub-underground scene in the pages of FE. Her (and Michael Gira’s) stories and plays in this issue are just beyond-belief awful. 21 years later, I can count the # of people I know who care about Lydia Lunch and her non-Teenage Jesus output on, hmm, let’s see – no hands! That was this magazine’s flaw during this period – supposing that “rock and roll people” were uniquely qualified to pen sort stories and write one-act plays, rather than simply be interviewed about the one thing they might have done well, which was rock. Particularly the more “confrontational” stuff from Gira and Lunch – did a mainstream or even a daring alternative indie press give any of this stuff the time of day outside of FE? No, because it was puerile and scatological and weak. This issue goes down hard on the SONIC YOUTH/SWANS/LYDIA axis, and that’s cool, musically speaking. There really was no one else writing well about that vibrant & interesting slice of American noise in ’85 (Conflict excepted, as always), and FE did it in a way that made one very excited to check it out & go record hunting immediately if not sooner.

This issue has a great interview and “fight” between Coley and NICK CAVE; big SONIC YOUTH interview; two CHRIS D.-penned stories (yay!); Steve Albini on some kiddie porn mag called “Pure” (a semi-legendary piece that he was taunted about for years afterward), as well as a thing he wrote on his own band, BIG BLACK; 2 Tesco Vee stories (whatever); SCIENTISTS interview; SAMHAIN interview (probably the only tangible connection to “hardcore” by this point) and an old resurrected interview with the VELVET UNDERGROUND. Byron Coley’s hand is all over this issue, and his writing is peppered with the all the Meltzer-ish shortcuts he became famous for, like t’ (“I have t’ say”) & r’ & o’ (“better n’ a bucket o’ blood”) & d’ (I forget). In a review of a Richard Meltzer book, Coley actually calls him “God”, which is more than modest since I think Coley’s subsequent music writing cleans Meltzer’s clock.

Issue #7/8 is really where these guys started to pursue half-fake vendettas against other record collectors (see homo-baiting “Collector Scum Profile” on someone named Dylan Cole) and particuarly annoying scene members & hangers-on. When I was 19 I thought this shit was hilarious and exhilarating to read; it still sort of is now, but only in the sense that these magazines have become a part of my DNA, I’ve read them so many times. There’s no doubt this issue is a classic, but it’s still a ways away from “growing up” if you know what I mean. More in coming weeks.