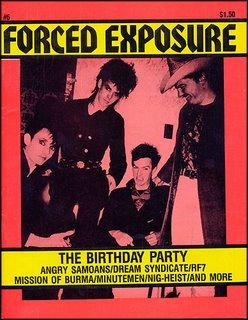 A couple of weeks back we foretold of a series I’ve been wanting to write for quite some time, a tribute/analysis/retrospective/deconstruction of sorts on what’s probably my all-time favorite music magazine, FORCED EXPOSURE. Sure, if you “came of age” in the 1980s and have the sort of general music taste that would lead you to stop on this here web site, calling this mag your “favorite” is nearly self-evident. It was everybody’s favorite at the time. My plan is to take each issue in order, rather than write a single lengthy tome about this magazine – because the Forced Exposure of 1983, which is where we’ll start this series, was worlds apart from the musical universe of #18 ten years after. Even breaking these apart issue by issue, I’ll probably only skim the surface as to how singularly definitional and yet representative this magazine was to its era in American sub-underground rock, the musical era more commonly known as that represented by the book “Our Band Could Be Your Life” Like I said a couple of weeks ago, I hope to put a finger on why this magazine was so special at the time, while leaving it open to any critical slings & arrows I can muster up as I flip through its pages for the umpteenth time. Let’s begin, shall we?

The reason we’re starting on #6 from 1983 is simple: I don’t own the other ones. I’ve seen them, leafed through them, but one thing to remember is where this magazine came from two years earlier. Forced Exposure started off in the bedroom of a teenage hardcore punk fanatic named Jimmy Johnson, who as I understand is lived in the Boston suburbs and was particularly gassed about SS DECONTROL. Well, growing up in Boston circa 1981-82, you were pretty much smack in the center of one of the three centers of American Hardcore, with Detroit/Northern Ohio and Washington DC being the others. Johnson flew solo, more or less, those first few issues – at least that’s my recollection when I read them years ago (I believe he had some interview help from “Katie the Cleaning Lady”). When I look at what was covered in the “back issues for sale” section of #6, it’s pretty much what you’d expect: Gang Green, F.U.’s, Necros, Misfits, DYS, Effigies, etc. Even still, his taste in hardcore was impeccable, at a time when only Touch & Go fanzine had the same level of quality control.

#6 is where the levee broke. For the first time, bands not on the breakneck hardcore touring circuit or not even remotely connected to hardcore were being spotlighted, praised, and interviewed in a somewhat juvenile (understandably so) but incredibly informed way. Bands such as the DREAM SYNDICATE, the BIRTHDAY PARTY and even VENOM (!). I may be 100% wrong on this, so correct me if so, but I’m pretty sure this is the first time Byron Coley bared his pen in Forced Exposure’s pages, after being a resident scribe at the New York Rocker and the excellent Take It! fanzine. He interviews Los Angeles’ weird fake-Christian punk band RF7 and scribes a few reviews, in the apostrophe-laden and made-up word style (spuzz, spoo, zug) that was hilarious, exciting & yes, a bit annoying at times. Most of Johnson’s stuff sticks to the ‘core or the nearly-‘core, but he also dips a toe into some raving reviews of goth heavyweights of the time like the MARCH VIOLETS and SOUTHERN DEATH CULT (much like Touch & Go used to go ape over the Virgin Prunes). Another Boston teen, Gerard Cosloy, was a fanzine up-n-comer at the time, and he submits the Dream Syndicate interview, and it’s a good one, very “in the moment” when that moment was just after their incredible debut LP “The Days of Wine and Roses”.

Like any fanzine from this time, it’s a blast to look back & see the brand-new punk & post-punk records that people would gladly trade a kidney for in 2006 going for $3-$6 in advertisements. An additional treat is how out-of-step Forced Exposure was with the Maximum Rock-n-Roll hardcore punk orthodoxy of the time, which was uber-“politically correct” before any of us had ever heard the term. Exhibit A is an interview in #6 with the NIG HEIST, easily the most un-PC band of the day (GG Allin and the F.U.’s notwithstanding), and Exhibit B is a screed against the “Rock Against Reagan” collective championed by lefty punk bands MDC and the Dead Kennedys, which makes the case that the whole thing was a charade designed to buy a particular hippie named Dana Beale some more dope. Coming from the west coast, the first time I saw a punk rag that dared to question the Orwellian judgment of MRR was pretty refreshing (Flipside, the other popular west coast punk mag, was completely and totally apolitical).

That’s probably as good a place as any to stop on #6. Next time we will look into double-issue #7/#8, which is where virtually all hardcore pretentions were shed (which was wise, because American Hardcore was d-e-a-d as a doornail by 1984) & the magazine began building toward its peak. Oh- and #6 doesn’t appear to be available anywhere online, but every other issue from then on is still for sale at Forced Exposure central.