“LAUREL CANYON – THE INSIDE STORY OF ROCK & ROLL’S LEGENDARY NEIGHBORHOOD” by Michael Walker……. 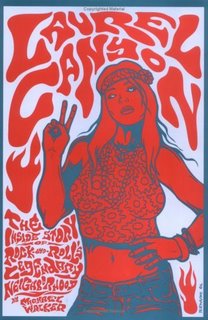 “Quick” , I asked my wife, “what do you think of when I say ‘Laurel Canyon’?”. She replied, “Um, Mulholland Drive. Fires. That lame movie we saw”. Not bad. Me, my first associations with this Los Angeles neighborhood center around the “cocaine cowboys” of mid-1970s rock, your Eagles, your Pocos, your J.D. Southers, and all them baddies. The tales of those guys spinning out of control and getting their comeuppance under the sway of the coke spoon have always captivated me, and when I picked this book up in a store recently and started flipping through it, I alighted upon a well-written, very funny section about Doug Weston’s Troubadour (a legendary LA club for “singer-songwriters”, and later, hair metal bands), and all the coke fiends lined up outside the door and in the club. I bought it on the spot.

Mind you, despite many trips in and around LA over the years, I can’t say that I’ve ever knowingly been to the Laurel Canyon neighborhood. After reading the book I think I may have hidden in its hills with friends to drink alcohol before a show, given its close proximity to the “Sunset Strip” and all the clubs, but I could be wrong. It’s a big-ass city, you know. Walker spends the first third of the book building up the mythos of the place. a true oasis of country life in the big city, and its status as the ground-zero nexus of hippie/folkie LA in the 60s -the place where THE BYRDS “took flyte” (ouch), where the abominable CROSBY, STILLS & NASH got it goin’ on, where earth mother JONI MITCHELL nursed her flock, and where FRANK ZAPPA did some legendary time hosting a cavalcade of flipped-out freaks. Walker, who lives in the neighborhood still, and obviously reveres it, is quite taken with the harmonic covergence of all these types to the same patch of real estate around the same rough time (1965-69), and the neighborhood’s larger place in a crazed but deeply meaningful time for those who were coming of age during the exploding era of sex/drugs/rock. It’s pretty obvious that if you weren’t there, and I wasn’t, you missed something pretty goddamn fun.

To Walker’s credit, he wanders out of the ‘hood frequently into greater Los Angeles to tell a much bigger story – actually more a collection of funny, color-filled anecdotes & recollections that illustrates the LA rock scene of the time very well. Sure, he leans too much on CSN&Y and their place in it all, but I guess he’s not the first nor last to dig their mellow sounds, for whatever reason. The book ends the 60s section with the bummer trifecta of Manson, Woodstock and Altamont, and then the fun really begins. The chapters on 1970s LA & Laurel Canyon’s place in it all, which make up the entire rest of the book, contain pretty much all the wacky cocaine hijinks you can handle. The first time I ever really paid attention to music as a kid, The Eagles were all the rage (“Hotel California” era), and I hated them from day one. Out or respect or deference or lack of good stories, they don’t get top billing in Walker’s tales of excess and wanton greed during the LA “cocaine era”, but it’s all a great read nonetheless, and even in the limited space he gives them, Henley & Frey & co. come off as buffoons. Groupies like Morgana Welch and Sable Starr are profiled & quoted throughout, with side trips to Rodney’s English Disco and to Led Zeppelin’s hotel rooms. The punk era, once it arrives, is barely mentioned, except for the metaphorical power it held in driving all the crass, flash & drug-driven Hollywood idiots out of the picture. That’s not exavtly the way I’d heard it told before, but there you go.

Now I will take Walker to task for referring to the site of Altamont (Livermore — deep, deep in the San Francisco Bay Area’s eastern flank) as “what is now known as Silicon Valley” – as my wife said, “If he’s making mistakes that huge and the editors are letting them through, how can you believe any of this book?” — but I still found this thing a total blast to read. Brisk, entertaining, full of larger-than-life characters, and with an exceptionally small amount of ass-kissing, I found it hard to put down – and thus plowed through three-quarters of it to finish only last night. I just know I’m now going to drive into the Canyon next time I’m up there, too, if only to stop by the site of the Wonderland Avenue murder (John C. Holmes, anybody?) or to check out where Tom Mix’s horse is buried.