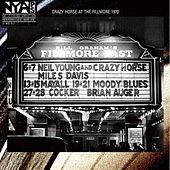 Word among the community of Neilmaniacs, among whom I feel safe yet not a permanant part of, is that this brand new NEIL YOUNG live CD from 1970 is the first of several retro live offerings set to come out in coming years. For a guy who’s kept so much of his legacy under defiant wraps for so long, Neil’s obviously starting to soften a bit -which makes the kids (and the olde-timers) quite happy. This set is only a mere six songs from the post-“Everybody Knows This is Nowhere” era, which is sorta strange – I mean yeah, two are loooong, dirty, exceptionally loud Crazy Horse jams (“Cowgirl In The Sand” and “Down By The River”), but even so the whole thing only clocks in somewhere under 40 minutes. Guitarist Danny Whitten is on fire on the latter in particular, just an all-time scorcher to begin with, and in some stretched-out, near-improv parts it’s better than on the album for sure. Another winner is the song “Wonderin'”, which I’ve heard on bootlegs in acoustic form and on Neil’s 1980-ish rockabilly record as a, well, rockabilly song, but never as a Crazy Horse-style jammer. Since I’ve already told you half of the 6-song lineup, there’s no reason to hide the rest: “Everybody Knows This Is Nowhere” (marginal), “Winterlong” (OK) and “Come On Baby Let’s Go Downtown” (fantastic). It’s a cool document that sounds like a professional but raunchy live record, so if this one’s been in circulation as a boot before (I honestly wouldn’t know) then I can promise you this version’s better. I could have totally used another 40 minutes, though.