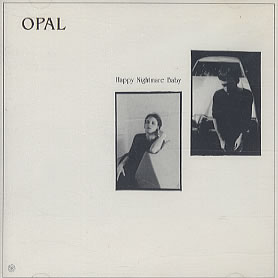 I am fortunate enough (I think) to be able to say that I saw the DREAM SYNDICATE live a few times in the 80s, but I’m not so lucky as to have caught “the Kendra lineup” – the 1981-82 one that recorded one of my Top 10 fave records ever, “The Days of Wine And Roses”. Kendra is KENDRA SMITH, and she’s always been sort of a witchy psychedelic mystery lady. She was persona non grata for a year or so after the album (the album), and then all of a sudden she had this new band in 1984 with Dave Roback from the RAIN PARADE called CLAY ALLISON & a great gentle psych EP, and then a couple years later, pop – out came the 1987 album by her new band OPAL, who were actually the same band, and on SST records no less (then regularly polluting the bins with October Faction and Swa records). No tours, no big hoopla, just a fantastic psychedelic/kraut/paisley guitar record that sounds even better to my ears in 2006 than it did back then.

“Happy Nightmare Baby” for years actually took a backseat in my eyes to the posthuomus 1989 OPAL record called “Early Recordings”, which had all the Clay Allison stuff + a few extras. That one was really folky, sometimes-acoustic Velvet Underground-inspired shaman rock, with a lot of the mystical swirling weirdness of their later stuff only hinted at (and it’s great). But today I’m thinking “Nightmare” is the real lost classic. Roback plays guitar & feeds back like the lost son of Syd Barrett and Michael Karoli, but in a really restrained, strum-and-nod off sort of way that sets the flickering-candle mood perfectly. It’s funny, I saw Roback live with MAZZY STAR around 1990 and his stage presence – dressed in black head to toe, sulking, unsmiling, totally too cool and “above it all” – was so off-putting that I mentally wrote him off as a big poseur for years. But that wasn’t very fair, now was it? And Kendra Smith’s vocals are just the most, you know what I mean? The careful, even way she doles out her words is a beautiful thing, most fully realized on the classic “She’s A Diamond”, a blues that’s maybe the best thing they ever did. I’m also partial to the psych-by-numbers “Magick Power”, which could have come off “Piper At The Gates of Dawn” (it’s that good). A record with some obvious staying power this great should have been released on CD, don’t you think? I think it may have been at one time, but good luck finding it now. That ain’t right; for now, go visit Endless Mike – he’ll set you up.

Oh and hey – I have a question as well: Did OPAL really ever play live? I lived two hours from Los Angeles during their lifespan and never once heard of a show. Did you?