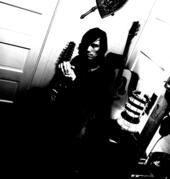 Got a hankering for something TYRANOSAURUS REX-ish this morning? You could do a heckova lot worse than the new CD from Modey Lemon’s PHIL BOYD — that is, PHIL BOYD & THE HIDDEN TWIN. Phil’s got a seeing eye peeking up the slacks of Bolan and Townes Van Zandt, at times it’s almost TRUX-like in its surreal portrayals of weirdos and outsiders, in a musical language that’s probably unreadable when splayed upon the page. The disc is mostly acoustic, mostly distant in tone & feel, but lightens up a bit at times like on the “sweet” closer “And You Glow”, which might be the best thing on here outside of the excellent wanderer “Axeman Of The Glass Forest”. The ghost of Othar Turner might’ve been bumming change around the studio as well the day this was laid down, as some out-of-place fife or something like it pokes its noodling head up from time to time to add a strange touch of the otherworldly. I’m still a little nervous Phil and the Modey Lemon guys actually believe in unicorns and faeries (for real), but outside of that, this thing’s a mighty fine gust of uncalculated loner folk.