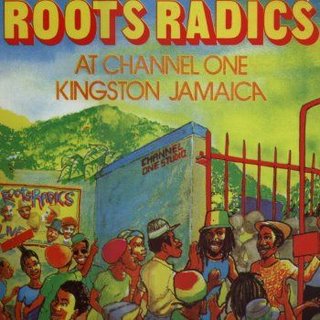 Another notch in a long and seemingly endless line of first-rate dub discoveries for my ever-widening belt. This LP-only treasure from the ROOTS RADICS, one of the 1970s’ and early 80s’ most smoking backing groups and instrumental warriors in their own right, is exceptional tricked-out deep dub. These 1982 recordings are each dedicated to various island movers & shakers of the day, mostly toasters or DJs from what I can gather, and were recorded at both Channel One in Kingston and at King Tubby’s not far away. There is a real mystical and hazy quality to the better half of these, with distant echoes from the Jamaican studio netherworld, and eerie, disembodied voices circling the bass. Maybe the best one is track #1, “Dedication To Dean Frazer & Nambo”, which I can’t seem to stop listening to. I guess most of the mixwork is being done to early 80s reggae 45s/12″, but it’s so spacy and streched-out it could be reworks of some ethereal roots music from nearly a decade before. Terrific stuff, very worthy of a CD reissue for sure.