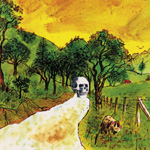 This brand new CD from these San Franciscan wandering minstrels is easily one of my favorite left-field music picks of 2006. I’d only heard the SKYGREEN LEOPARDS once before, on a great single track called “Julie-Anne, Patron of Thieves” available on some mp3 blog. Big-textured folk-pop sounds, and an approach that paralleled a strange country-folk cross between BIG STAR and THE CLEAN – well, that’s for me, partner. And this new one’s even better. Some folks will probably get some yuks out of comparing this to the GRATEFUL DEAD, but not me. Surely the band would take it as a compliment of sorts, since “Disciples of California” is mining late 60s San Francisco in much the same way as THE SADIES’ “Favorite Colours” record does, except the Leopards make prettier sounds. Very pretty. You know “Morpha Too” and “I’m In Love With A Girl” by Big Star? Picture a more uptempo album of that, crossed with very jangly California country/folk sounds and just a general sense of wanderin’ and driftin’. I could certainly do without all the jesus talk, but I suppose that’s getting to be de rigeur for a certain type of musician, whether he’s religious or not. It’s a really fine record, and I hope you go buy one on my say-so.