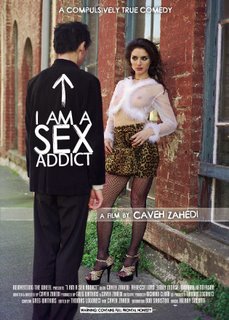 Iâ€™ve barely written about film or movies or cinema before in my life, only a 1992 article on seventies films for an old fanzine I did + whatever youâ€™ve seen on this here site the past month. I watch a lot of â€˜em, though. Iâ€™m a parent, and often the post-8pm, a.k.a. bedtime, ritual involves popping a DVD into the drive and sinking into the couch. You know, thatâ€™s not a whole lot different than the 8pm ritual before we had a kid, come to think. In any event, I even got out of the doghouse and into the arthouse a few times the past three weeks as well â€“ here are a few that I watched, with the added bonus of my Entertainment Weekly-style â€œgradesâ€:

ART SCHOOL CONFIDENTIAL â€“ Everyone said this would be lame, and they were right. Just what happened to Terry Zwigoff, the excellent director of â€œCrumbâ€ and â€œGhost Worldâ€? First he gave us the weak â€œBad Santaâ€, a movie I only remember for a fantastic t-shirt at the end of the flick that said â€œShit Happens When You Party Nakedâ€, and then this boring, disjointed, sappy/pseudo-romantic weirdo comedy. The preview, showing some of the stereotypical late-teenage art school freaks that populate the film (unfortunately as very minor characters in seconds-long skits), was definitely as much as anyone needed to see of this one. C-.

THE QUEEN â€“ Can you image a director thinking to himself â€“ â€œHmm, letâ€™s make a fictionalized film about the complex relationship between Queen Elizabeth and Tony Blair in the week following Princess Dianaâ€™s deathâ€ â€“ and then delivering 90 minutesâ€™ worth of great acting and solid entertainment? It happened, folks. Helen Mirrenâ€™s every bit as good as youâ€™ve heard, and while this filmâ€™s nothing more than a cinematic face in the crowd overall, itâ€™s still well worth seeing. B.

BORAT â€“ I guess if I were cool Iâ€™d be helping to lead the Borat backlash right about now, but Iâ€™m not cool. I just like to laff. I first got acquainted with this character in 2000 while visiting some friends in the UK, who showed us a PAL-format tape of Britainâ€™s â€œAli G Showâ€, featuring this fake moonbat Kazakhstani reporter interviewing proper Englishmen & women. Now that heâ€™s taken America with this totally uncouth, offensive-on-multiple-fronts film, I have to applaud, because everyone in the theater, including me, was doing the boffo belly laugh for the entire length of the film. There are so many small laughs that pile up on each other. My favorite small laugh â€“ when Borat tries to bond about music with some tough urban black kids in an Atlanta ghetto, and asks them if theyâ€™d ever heard â€œCorky Bushkinâ€ and then sings some ridiculous made-up nonsensical Kazakh song. I actually threw my head back for that one. Itâ€™s not â€œthe greatest comedy of all timeâ€, as some have said, but if you put it in your personal Top 50 Iâ€™d totally understand. A-.

THE PUFFY CHAIR â€“ Part of the recent nouveau-realist vogue of â€œtalking indiesâ€ (much like Andrew Bujalskiâ€™s excellent â€œFunny Ha Haâ€ and sub-par â€œMutual Appreciationâ€), a style notable for non-professional, only moderately decent-looking actors & actresses; Cassavetes-style improvised dialogue, and frustrating twentysomething ennui and angst bordering on the clinical and self-destructive. This film from earlier in the year is quite a hoot, a weirdo road movie that comes across more as a tragedy than a comedy. 3 characters, a boyfriend/girlfriend team in the midst of some serious relationship issues + the guyâ€™s granola/hippie brother, embark on an Atlantic coast trip to pick up a La-Z-Boy they bought on eBay. Chaos ensues. Feelings are hurt, then massaged, then hurt again. Very much worth a Netflix DVD rental, which is where youâ€™ll find this. B.

FOR YOUR CONSIDERATION â€“ Iâ€™m done with Christopher Guest movies in the theater after this moderately middling comedy, which is really a fake-umentary targeted at fogies of my parentsâ€™ generation, and plays accordingly. I didnâ€™t think â€œMighty Windâ€ was all that either, and this oneâ€™s less funny than that one was. C.

I AM A SEX ADDICT â€“ This one played far more like an uproarious laugher than I expected given the subject matter, and it is as strange & offbeat â€“ but yet still totally quick-paced and relatively linear â€“ a comedy as youâ€™ll find anywhere. I really dug it. Itâ€™s a first-person retelling of the directorâ€™s problems with sex addiction, starring him and a trio of women who play his ex-wives and girlfriends. Itâ€™s also quite tragic in parts â€“ and a bit annoying that just about every woman who plays his ex-wives or prostitutes is a total knockout, including this real-life pornstar named Rebecca Lord â€“ yet I applaud Caveh Zahedi for something so wildly confessional and funny at the same time. Rent this one – itâ€™s a low-budget, very offbeat winner. B+.