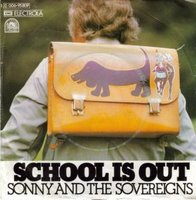 A minor entry which updates 1964 with the Glitter sound. It has a monster drum heavy production, but the corny melody (that owes a heavy debt to Lipstick On My Collar) definitely grates. The B side is more enjoyable as itâ€™s an instrumental version. I especially like the mumbled humming that replicates the Glitter Band baritone sax sound. The label mentions that this is a â€œ British recording for Tamla Motownâ€ and itâ€™s co-produced by P. Anders. I was wondering if this could be Peter Anders who with Vinnie Poncia was behind The Tradewinds and tons of 60â€™s New York produced stuff. It would make sense sonically, but not sure on that one.

PS: On closer inspection of the cover photo; it looks likes the guy has sideburns and they seem to be turning greyâ€¦a bit unsettling that!