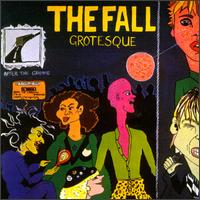 This 1980 near-masterpiece is the key cog in THE FALL‘s transition from the plinking, plonking keyboard-driven minimalist punk band of the first two records to the greatest post-Stones UK band ever. “Grotesque” opened the gates of experimentation and true poetic/slur repetition that soon resulted in the 1981-83 classics “Slates”, “Hex Enduction Hour”, “Room To Live” and “Perverted By Language”, all of which are high among my favorite records ever. This one’s not far off. The Fall’s third record really announced just how far ahead of the British post-punk pack the band were, in the sense that you listen to this record and it doesn’t impress simply because it’s “ramshackle”, “personal” and “DIY”. It’s all these things, and it’s also a full-on, well-crafted, every-song-a-killer one-chord-jam rock and roll album.

Take my favorite one on here for instance – “The N.W.R.A.”. For over nine minutes, one simple four-second riff is ground into brittle submission as Mark E. Smith spits up a spleen with alternating pride and loathing for his half of the country. His lyrics are fierce and impenetrable to anyone except the most careful student, and lord knows I’ve spent some time in my day trying to deconstruct this man & his brilliantly wacked mind to no avail. “The N.W.R.A.” is just an amazing statement, a radiant and ear-challenging simplicity the likes of which had never been heard in rock before. (Some 70s Germans come close, but this is truly its own deal). “New Face In Hell” is another complete stunner, The Fall’s first attempt at a weird sort of dance music that they added a couple BPM to later on “The Classical”. Is that a friggin’ kazoo I hear? I believe it is, either that or a comb tucked inside a kleenex. A darker, ranting sort of mood takes hold on “Impression of J. Temperance” and the ambient, nearly-spoken “C’N’C-s Mithering”, and helps make these guys the musical embodiment of Northern England as it existed at the time.

This album also marked the departure of any real “punk” left in their systems from the early Una Baines days — “Pay Your Rates” and the excellent bouncer “English Scheme” were their final salvos in that realm until much, much later. No, “Grotesque” is really the first truly classic FALL record, and listening to it this week & my excitement therefrom is a hallmark that I’m about to enter another Fall bender. They come every couple years and don’t stop til the catalog’s been exhausted. See you in 2008 – I’m going under….