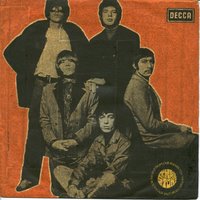 Iâ€™d argue that this 45 from 1967 is something of a medium-sized disaster, and a black mark on the Stonesâ€™ legacy that stands out like an ugly, money-grubbing stepchild. Ostensibly the bandâ€™s first true step into â€œflower powerâ€ psychedelia, both sides of this single have always come off to my ears as a totally opportunistic stab at bonding (and selling records to) the burgeoning hippie generation. The subsequent album â€œTheir Satanic Majesties Requestâ€, while full of watery sitars and groovy sounds, is more experimental and carnival-like, and stands as a pretty solid record to this day. But I just laff when I hear this one. The tuff Rolling Stones of “Between The Buttons” earlier in the year, and especially of “Beggars’ Banquet” the next year are nowhere on this put-your-hands-together-with-the-groovy-children interlude. The most cringeworthy line of all comes in “Dandelion” toward the end, with Jagger in high-pitched pied piper mode: “Little girls and boys come out to play/Bring your dandelions to blow away…”. And get this – the Stones even invited John & Paul from the Beatles to sing “love, love, love” backup on the A-side too! Yuk! I guess I’d have a better Hindenburg-esque disaster story to tell here if the single had totally bombed, but it went to #8 in the UK and cracked the Top 50 in the US. Tim Ellison, with all due respect, if you’re not already logged into the comments box working up a frothing defense, I’ll be more than surprised.