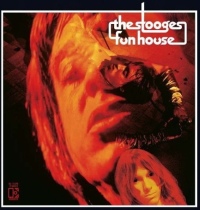 How excited were you to see “deluxe edition” reissues of the first two STOOGES records last year, with completely new add-on material/outakes from each of those two legendary records? I was pretty psyched. Sure, I’ve heard a bunch of that 7xCD (!) “FUNHOUSE SESSIONS” box set that Rhino put out a while back, and I always felt that someone with some patience ought to sit down and cull the wheat from the chaff and create the definitive “alternate versions” CD of the thing. Well, someone did. Moreover, they also pulled out a bunch of alternate versions from the first album and wow – they are fantastic (and revealing). Let’s talk about it some.

The second disc in the 2-CD pack for “The Stooges” has got some what-might-have-been versions that are truly paint-peeling. I’m smitten primarily with a version of “I Wanna Be Your Dog” with a more subdued Iggy vocal that could have easily been the one they chose for track #2 on the album – but hey, I’m glad they didn’t, even though this one’s fantastic. There’s also a nearly 8 minute version of “Ann” that takes that killer riff that closes the song and pummels it into the mud for five extra glorious minutes (!), and a great “No Fun” that’s almost seven minutes, full of absolute ear-shredding Ron Ashton guitar damage. Most of these 10 tracks that weren’t chosen for prime time were axed with fairly good reason, but on this two-disc set in particular this extra material is totally balls-out & wonderful, to a song. Still looking for takes 7 and 12 of “We Will Fall”? Well, you’ll have to keep looking, because thank god they did not fill the need to include that one, the nadir of the band’s early career, on this CD.

The “Funhouse” stuff is also wild and whooping, particularly the long & rambunctious two takes on “Funhouse” itself toward the end of the bonus stuff. Iggy experiments with differently-timed screams and cro-magnon hollers throughout, and what’s great about this stuff is just how improvised so much of what became the final product was. I mean, I’ve heard these two albums as many times as any records in my entire life – they are aural bibles to me and to so many others – but a lot of the timing of each solo or drum pattern or war whoop was obviously left to the spirit of the moment at the end of the day, something that becomes apparant when listening to the different takes. The 2 tracks on this that didn’t make “Funhouse” – “Slidin’ The Blues” and “Lost in the Future” – are total throwaways. If one of these replaced, say, “1970” or “LA Blues” – my my, what a different and less-fulfilling world we would be living in today.

Anyway, I’m giving these things my unequivocal endorsement, for what it’s worth. All three Stooges records have now been given the gold standard treatment, and I guess that means it’s time to close the books on ’em, unless there’s another set of “Iguana Chronicles” set to come forth – hey, some good ones this time!