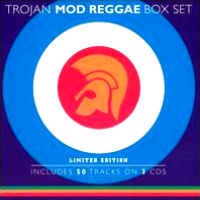 I’ve been getting schooled by these TROJAN BOX SETS for well over 6 years now, ever since I bought the dub & rocksteady ones and realized what a fertile representation of the whole of Jamaican music these sets are. I mean, there are very few Jamaican artists of the 60s-early 80s who are not covered on these cheapo ($15-$20) 3xCD boxes, so you really are getting the cream of the crop in ska, roots, dub, “rude boy” etc. when you snag one of these. I wasn’t sure what I was in for by the title “MOD REGGAE”, but I figured it would be faster, danceable, 60s ska with some righteous porkpie soul sprinkled in as well. Thankfully I wasn’t far off – I’ve learned enough about the genre by now that when I saw JOHN HOLT s classic “Ali Baba” and THE SKATALITES‘ “Lucky Seven” both on Disc One that the tune selector had his nuts on straight.

Mod reggae, if you believe the liners, is 1960s reggae that was favored by the posing mods of London not in the 60s, no, in the eighties. What??!? For the British DJs who put this together, a movement of kids who came together to dance, not make music themselves, is powerful enough to warrant its own soundtrack – much like the bizarre “Northern Soul” phenomenon. I’m glad these kids picked mostly winners, though – the 50 songs on this set include some of the rawest, monophonic 45rpm ska I’ve ever heard, some killer instrumentals, various LEE PERRY solo and production efforts, and the odd soul ballad or two that you can quickly skip over. There are at least 5-6 tracks on the set that have zero reggae-ish sound to them, and could very well pass as British or American soul singles of the time (these Stax/Motown clones are the least interesting items on here). All told, the box is a lot like the “SKINHEAD REGGAE” and “RUDE BOY” sets – songs that coelesce around some made-up theme and yet work exceptionally well together anyway. I say buy one, why don’t ya.