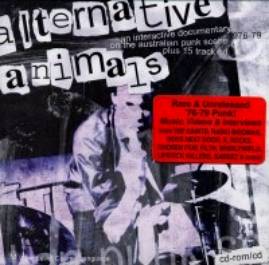 When was the last time you played a “CD-ROM”? The time you plunked down for a bootleg DVD in a CD jewel case in Chinatown, & later tried to unsuccessfully crank it through your new DVD player? (oh wait, that was me). If you’re not thoroughly learned in the rich glories of nutzoid ’77-’79 Australian punk (yet), you might want to think about giving this “ALTERNATIVE ANIMALS” set a spin. It’s nuts. Disc 2 is a “pedestrian” set of classic gonzo Aussie punk rock, with some slashing triumphs for the ages — X‘s “Home Is Where The Floor Is” makes its first digital appearance, and X, my friends, the Australian X, knew virtually no peers in the gnarly, blazing grunt-punk world of the time. THE PAGANS, maybe. Other ragers, perhaps more well-known, include THE LEFTOVERS‘ “Cigarettes and Alcohol” and the PSYCHO SURGEONS‘ “Horizontal Action”, with a couple of ballistic live SAINTS tracks to kick it off as well. A strange selection, though, when new waver acts like WHIRLYWIRLD and THE ORPHANS are in starring roles next to knuckle draggers like, say, ROCKS and THE BABEEZ. And whose idea was it to ignore RAZAR and THE VICTIMS??? One hot little # I’d never heard before is the wild “Sex Crimes” from Nick Cave and his BOYS NEXT DOOR, a.k.a. the embryonic BIRTHDAY PARTY. Huzzah! This one’s rabid, fast and very p-u-n-k, if you can imaging Cave & the gang as true punx.

Disc 1’s the one that’s probably shifting the units on this thing, though. An “interactive” walk through virtually every punk band of the day, it includes family trees, interviews, some live footage, fanzine snapshots, and photographs of every 45, LP or comp that came out of Australia & had a good-for-nothing punk in the band. It can either be a total time suck for a few hours, or one can choose to be schooled in small bites. I chose the latter path, as navigating around a CD-ROM feels so nineties. I reckon I got through most everything I was interested in, but I’m sure there’s an “Easter egg” or two hidden that I didn’t tap into. Seriously, if Aussie punk is kinda new to you and you’re looking to connect some dots (and it’s been said before, but this was probably the single most roaring per-capita punk rock nation on the planet outside of the small nation of Los Angeles), this affordably-priced set is the single best place to start. If it’s just the music you’re after, get the “Where Birdman Flew” bootleg, the “Murder Punk” CDs, the first couple SAINTS albums, and then get this, and you’re well on your way to a professorship.