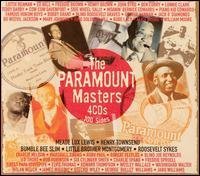 Wow, the expiration of copyright up to about the mid-1950s is really something, isn’t it? Long after the original artists and owners of their songs have done passed on, reissue houses like JSP RECORDS continue to bring out riches by the batch, often unheard & certainly never collected in such sheer abundance. Their CHARLEY PATTON and CARTER FAMILY sets sorta beg the question as to why you’d fork out quintuple the price on other versions of the same songs – though I certainly do understand why – and the same goes with tracking down each & every tidbit released by the all-important Wisconsin-based Paramount label, which specialized in some of the more raw & venerable “race records” of the 1920s and 30s. Been meaning to get this one for some time, as it purports to be the biggest & best collection of Paramount recordings ever assembled (including many making their way to LP or CD for the first time), but my quest was imbued with a new sense of urgency when I heard the incredible KING SOLOMON HILL (“Whoopee Blues”) on Yazoo’s recent “THE STUFF THAT DREAMS ARE MADE OF – SUPER RARITIES & UNISSUED GEMS OF THE 1920s & ’30s” 2xCD.

The Hill stuff is terrific, achingly raw and soporific blues of the highest grade. Took me a while to sit down and write about the whole collection, though, because it’s 100 songs and it’s quite an effort to critically seperate the wheat from the chaff without a ton of repeat listening. Since a session with all 4 discs takes well over five hours, I’ll own up that I don’t quite have this one memorized yet. I find that my key impressions of it are that it has a lot more balladry, barrelhouse blues (even MA RAINEY herself makes an appearance) and skillit-lickin’ hot jazz than I expected, though deep blues, gospel and nascent country are still the norm here. Some names you might recognize include GEECHIE WILEY (also known as GEESHIE WILEY); BO WEEVIL JACKSON; CHARLEY PATTON (doing the churchy chesnut “I Shall Not Be Moved”) ; ED BELL; and the great pianist ROOSEVELT SYKES. The quality meter slips up and down over the course of the discs, and at times it’s fourth-tier stuff that’s on here for completist reasons than any inherent nod to quality. I must say that I expected the whole package to move me a little more, but it’s OK nonetheless, and for just over $28 for the whole thing, it’s not too much to ask to wade through some muck to get to the pearls. The last 3 blues/old-time comps I’ve purchased before this one (“American Primitive Vol. 2”, “Good For What Ails You” and the aforementioned “Stuff That Dreams Are Made Of”) were all so great, however, that I’d recommend going to those first & saving this one for dessert.